REASONED SPIRITUALITY: exploring spirituality, the meaning of life, the concept of God.

HOME | ARTICLES | SITEMAP
GUEST ARTICLE
(Please do not contact the webmaster in order to discuss opinions expressed in guest articles. They are submitted by contributors, and do not necessarily reflect the ideals held by Reasoned Spirituality.)

"Substance of Reality According to the Science of Kabbalah"

The wisdom of Kabbalah is a method for discovering the hidden part of reality, that imperceptible realm of reality that our five senses cannot grasp. It develops another sense in us, one that perceives the reality that exists beyond our present perception.

Although the will to receive is the substance of all reality, the desire in itself is neither matter nor atoms, which came later. Everything that was created, that exists as the basis of reality, is based on the desire to enjoy, an aspiration for pleasure. In each level of reality, this aspiration takes on different forms.

Every Kabbalist, without exception, from Abraham to the last great Kabbalist, Baal HaSulam, maintained that the entire substance of Creation consists of a desire to receive. Every Kabbalah book speaks of the same thing, and all Kabbalists are in agreement in that regard.

Kabbalists are people who attain the Upper World; they speak from tangible attainment, not from theory. The word, ìattainment,î refers to the ultimate degree of understanding. Let me make things easier to understand by using some drawings. 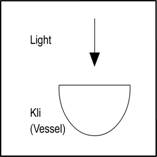 The desire to enjoy is the beginning of matter; Kabbalah calls it ìthe primordial matter.î However, it is still not a complete matter because at this point, it is created entirely by the Lightís action. This process precedes the formation of any matter known to us, long before the material formation of our universe.

Similarly, when we receive a gift, we feel the giverís attitude toward us beyond the gift itself. We should note that when we refer to the Creator, we actually refer to the giver. In this state of things, the created being (creature) begins to feel that there is a collision between the pleasure and the sensation of the giver of the pleasure (Figure 2). This collision stirs a reaction in the creature, making it want to be like the Creator because the Creator is higher than the pleasure itself. At this point, the will to receive evolves to the next degree. 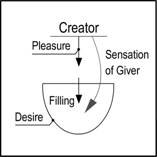 The will to receive then chooses to be a giver, like the Creator (the giver). This is the first reaction of the creature, though it is still not an entirely independent choice. It is rather a reaction that stems from its sensation of the giver, which makes it a compelled reaction, derived entirely from the presence of the giver. Thus, the will to receive has no free choice in the matter.

Now the creature begins to contemplate what it can give to the Creator. The Creator gives because He is the source of the pleasure. But when the creature wants to give as well, it finds that it has nothing to give in return.

To realize its desire to give to the Creator as the Creator gives to the creature, the creature decides to receive the pleasure from the Creator. This process is somewhat similar to a child who eats to please its mother. In this way, even when the child receives food from its mother, it acts as a giver to its mother.

When the creature is in this state of being, we can say that it is similar to the Creatoróit receives what the Creator wants to give, but only to give back to the Creator. The creature gives just as the Creator gives. However, this is not the end of the process. Now that the creature has performed a similar act to the Creatorís, it experiences an additional pleasureóthe pleasure of having the status of the giver.

This pleasure creates a new desire in the creature: a desire to enjoy the status of the giver, as well as the desire that the Light first created in the creature. This new desire does not come ìfrom Above,î and for that reason it merits the title, ìa created being,î ìa creatureî (Figure 3).

The root of the Hebrew word Nivra (created being) stems from the word Bar (outside). Thus, the term ìcreatureî or ìcreated beingî refers to something or someone outside the Creatorís will.

Once a creature is formed, it undergoes a sequence of interconnected states resulting from cause and effect. These states are referred to as ìUpper Worlds.î The Upper Light and the will to receive descend through the Upper Worlds to the lowest degree, called ìour world.î

At the degree of our world, we are totally controlled by the will to receive and we are completely detached from the sensation of the Upper Light, the Creator.

Our entire history is determined by the evolution of our will to receive; this can help us understand how humanity evolves. Every process in reality, with no exception, is a result of our ever-growing will to receive.

Once the spiritual structure just described materializes, the matter that forms our world is created. Our world has experienced several evolutionary eras, and today we are at a stage where we are starting to understand that spiritual evolution must begin.

Today, humanity is facing a series of crises on both social and scientific fronts. Many signs point to todayís bleak state of humankind and the global crisis it is experiencing. Drug abuse is perpetually increasing and begins at an increasingly younger age; depression is spreading like a plague, and international terrorism has become uncontrollable.

There is but one purpose to all of the above: to help humanity realize that the root of all our troubles is the intensification of our egoistic will to receive, and that we must mend it. Kabbalists wrote about the intensification of the ego ages ago, explaining that when humanity reaches this state, it will be time to disclose the wisdom of Kabbalah as a means to correct the ego.

From the book, Kabbalah Science and the Meaning of Life, by Rav Michael Laitman, PhD (Laitman Publishers, 2006)